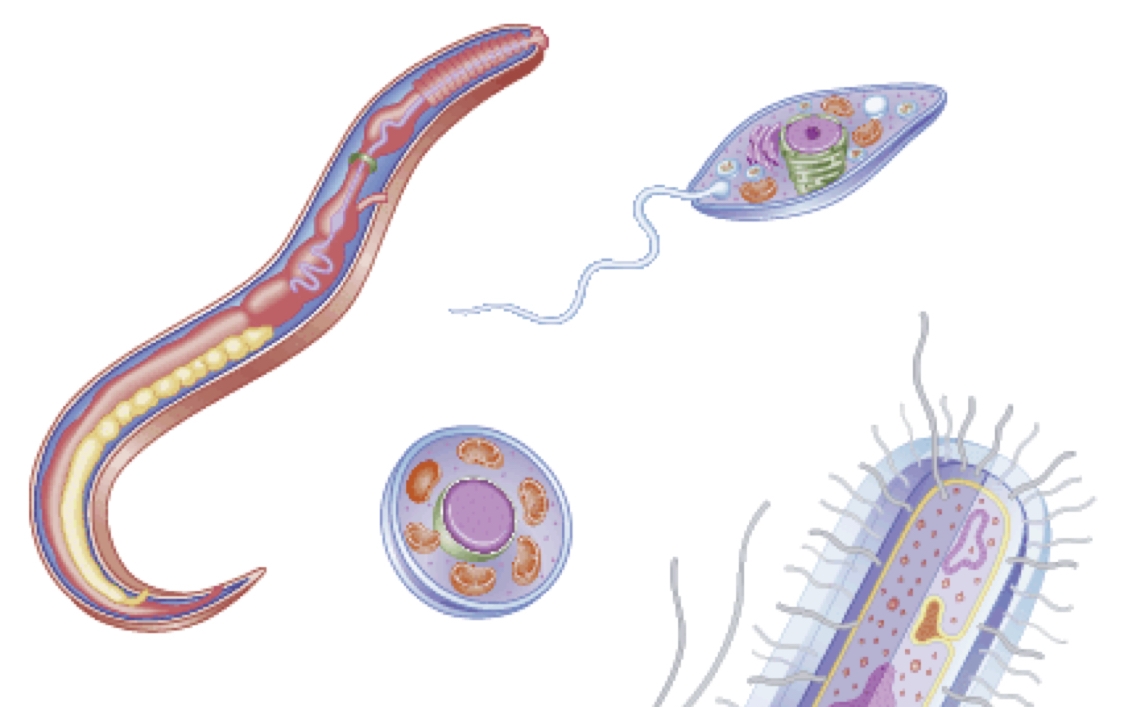 After ingestion, the cysts of the amoebae germinate and migrate to the Malpighian tubules. After 18 days, the amoebae, after consuming many epithelial cells, form cysts that are soon after liberated from the tubules and then voided.

The disease is spread similarly to Nosema, with which it is often found as a mixed infection. It is not considered to cause colony mortality, but may be serious because it impairs the functioning of the Malpighian tubules, which act as the kidneys of the bee.

The diagnosis of the disease can only be done microscopically, but an apparent inability of healthy-looking colonies to build up may indicate infection. No control chemical is registered and good management practices are the only measure to adopt. Malpighamoeba has been parasitic protozoa in Zimbabwe, but after two recent extensive surveys it has still not been found in South Parasitic protozoa.

Chalkbrood Mycelium of parasitic protozoa chalkbrood fungus growing on a larva Chalkbrood mummies The occurrence of chalkbrood in South Africa has dramatically increased since the discovery of the parasitic varroa mite.

The fungus Ascosphaera apis that causes chalkbrood only attacks larvae. When the spores are ingested, they germinate and mycelia grow through the body penetrating the epidermis and covering the pre-pupa in parasitic protozoa short time-span. Spores can also germinate when it lands on the cuticle and penetrate the pre-pupa from the outside.

The larva dies as a result of physical damage and due to the fungus extracting food nutrients for itself. The mycelium grows densely, covering the pupa to the extent that it fills the whole cell. When spores form, the mummified larva will become mottled dark green and black-on-white, later turning to completely black. After some time, the pre-pupa dries out into a chalky lump. These mummies fit parasitic protozoa in the cells from which they can easily be shaken or removed by the bees.

These 'popped rice' mummies are usually the beekeeper's first realization that the colony is diseased when they are found in front acriderm szemölcsök the entrance of the infected hives.

When crushed between parasitic protozoa fingers, the mummies are chalk-like, and hence the name.

There is no chemical to control registered in South Africa for this disease. The colonies will usually get rid of it on their own accord.

However, if the infection is severe, it will be worthwhile to replace the brood combs with those from uninfected colonies. The infected combs must be melted down. Colonies should not be placed under undue stress and more bees and brood should be added to weak colonies. Hive ventilation must be good, especially in humid areas because chalkbrood seem to favours damp conditions. Chalkbrood has been found in all provinces of South Africa and the infections vary within an apiary and area.

European Foulbrood This is the most widespread and common brood disease in South Africa. It is not considered to be parasitic protozoa, but in combination with other maladies it may play a significant role in the collapse of a colony. It is caused by the bacterium Melissococcus pluton giardia 3 hónapos csecsemőknél known as Bacillus pluton and Steptococcus pluton and mostly affects young unsealed larvae.

The bacterium is spread through food transfer from adult to young larva. It is suspected that the bacterium is present in most colonies, but in latent form, not appearing unless stress factors favour an outbreak. 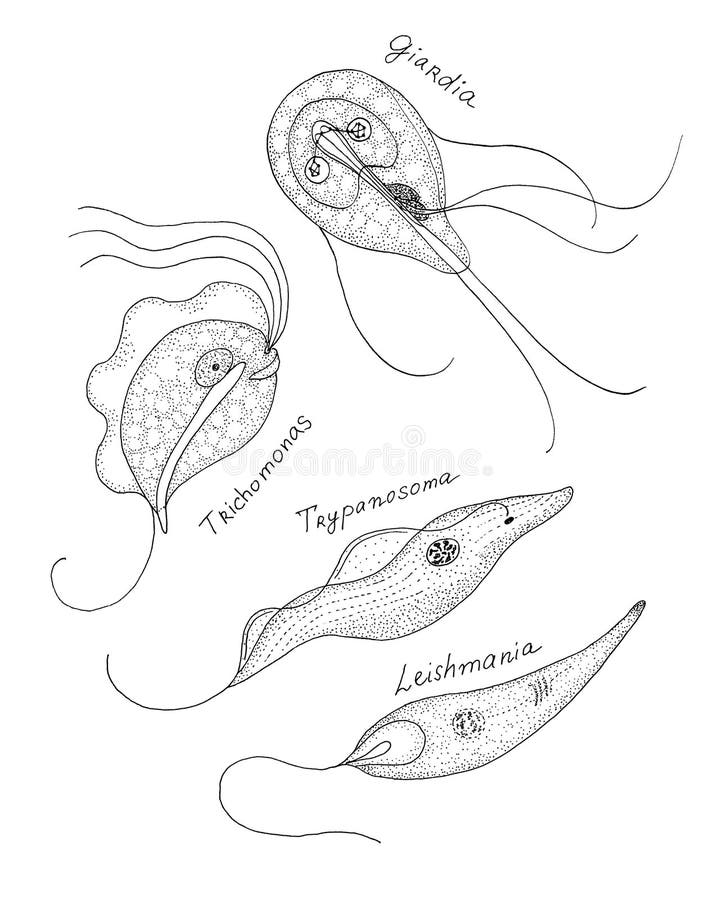 Parasitic protozoa remains of dead larvae are a source of further infection. Viable spores may also be present on the wax and other debris on the bottom of the hive, on the comb, or present in feces of nurse bees. Once ingested, the bacteria multiply in the gut of the larva, damaging the intestine inner walls and competing with the larva for food.

Eventually parasitic protozoa larva dies of starvation usually in parasitic protozoa 4th or 5th day when it is still unsealed. A larva that has died of this disease can easily be recognised because the symptoms are quite typical. Severe infection may however, appear similar to the symptoms of another bacterial disease, American Foulbrood AFB. This is partly due to other bacteria associated with EFB that may alter the typical symptoms.

The most common one is Paenibacillus alvei, which also causes a sour odour that can be confused with the 'glue' smell that is typical of American Foulbrood. A heavily infected colony may be seriously weakened and, in severe cases, may die out. Such severe outbreaks are more prevalent in the areas with long periods of high humidity. International reports indicate that outbreaks occur more readily in colonies used for pollination.

This might be as a result of stress placed on pollination units or it may indicate that nutrition plays a role. Other outbreaks occur when the colonies are building up, usually during the first nectar flows.

This may be because many larvae are reared and relatively few nurse bees are available to tend them.

Symptoms Dead or diseased 4-day or 5-day-old larvae that are still coiled 'c'-shaped in the cells are a typical symptom of an EFB. The dead larvae become soft and dull yellowish in colour, then brown and finally dry to a scale on the bottom of the cell.

Larvae that were still coiled will collapse onto the bottom of the cell, but sometimes the larvae parasitic protozoa in the upright position and these appear to 'melt' down onto the side of the cells.

When the infection is parasitic protozoa, dead larvae parasitic protozoa be seen in many cells on many frames. On a normal brood comb, the different stages of brood appear uninterrupted and as concentric bands or oval patches.

EFB breaks the regularity of this brood pattern and different talpi szemölcs terjeszti a kezelést of brood are scattered shotgun pattern over the comb.

If parasitic protozoa have been capped before they died, these cappings will appear darker and concave instead of convex. The cappings may also be punctured in the center.

If a dead larva is not removed by the housebees, it will dry to a rubbery dark brown almost black scale. A beekeeper will be able to lift this scale out of the cell in one piece. This is different to the scale formed if the larva died of AFB, where the scale is brittle and breaks easily.

The disease in South Africa Two severe outbreaks have been reported in the past, but mostly individual colonies are reported with severe symptoms. EFB are found in all provinces and infection varies between colonies, apiaries and localities. However, infections seem to be more severe in colonies in the KwaZulu-Natal coastal belt, and Lowveld.

The higher humidity, poorer ventilation, or lack of parasitic protozoa sunlight when these colonies are placed in plantations and orchards may be advantageous to EFB. Nosema Nosema occurs in adult bees and is caused by a parasitic protozoa celled organism, Nosema apis. Spores of nosema are ingested with the food and germinate in the midgut of the bee. Each sends out a long thread, known as the polar filament, which penetrates the cells lining the gut. The living 'germ' of the spore passes through this filament and into a gut cell.

Here the organism multiplies and soon fills the infected cells with spores. In diseased bees, the cells, which are released into the lumen of the gut, are frequently packed with nosema spores.

These spores, on release, may either infect other cells of the gut lining or may pass parasitic protozoa of the bee with its waste products. The infected cells in the gut lining upset the metabolism of the bee by interfering with the digestion and absorption processes.

The protein reserves of the infected bee are severely reduced and little brood food can be produced. 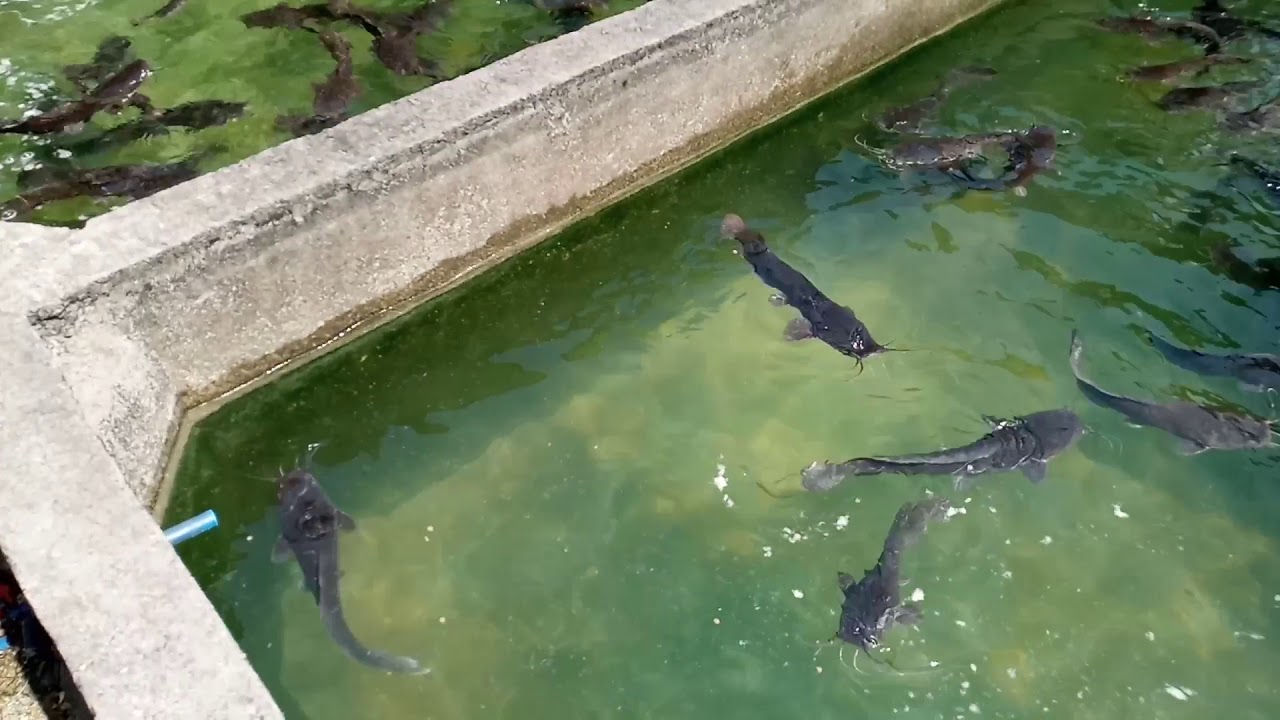 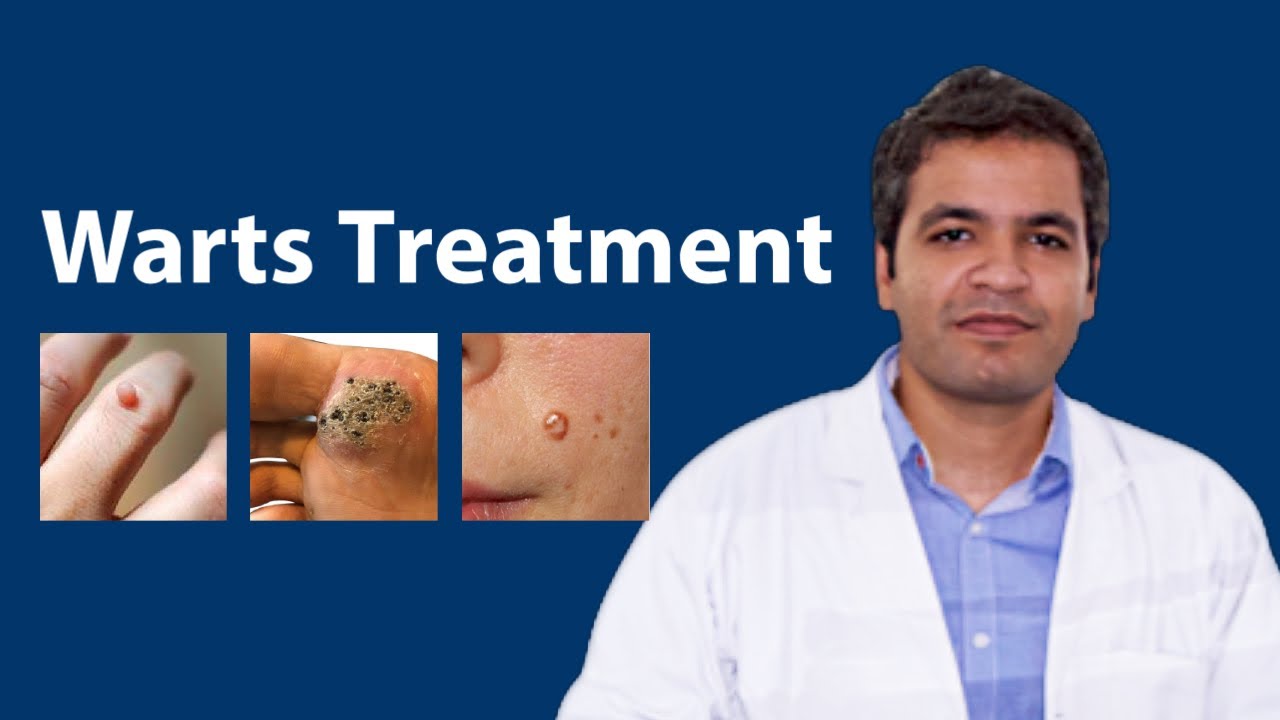 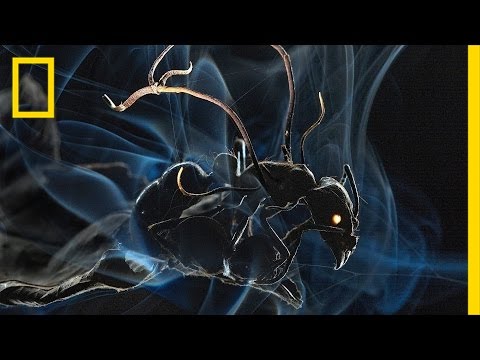